Both 90km/h winds and long periods of rain were forecasted for day 2 of my backpack along New Zealand’s Kepler Track in Fiordland National Park. I woke up around 6:45am, hoping to hear from the hut ranger about the conditions on the ridges, but he never appeared. After fortifying hot oatmeal and coffee, I packed my bags, checked my bunk, and headed out around 8:15am with some of the other brave souls who I would end up huddled with in the two shelters on the ridges later in the day.

What a different start day 2 was than day 1. Although the day started off sunny (though windy) and rainbows greeted me (see a few photos down) on the first hills, the winds and rains would rule the day.

I had on my thermal layers, fleece half-zip, waterproof jacket and pants, fleece hat, and fleece gloves. The wind was as bad as predicted, and I faced a steep climb almost immediately upon setting out. 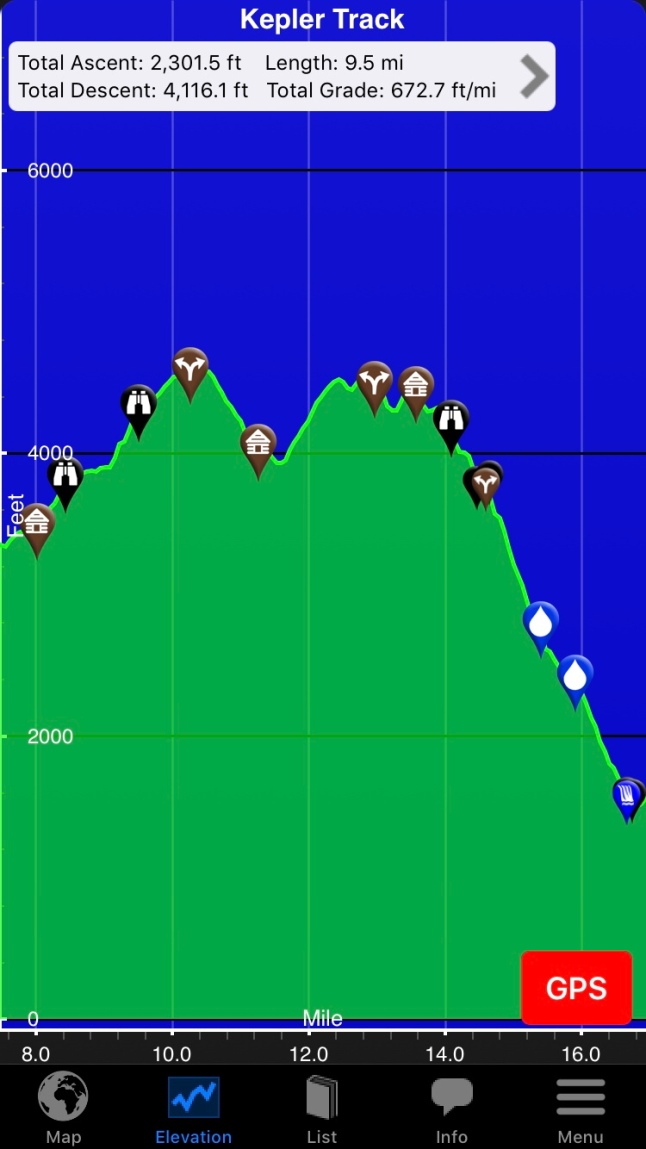 Although the winds nearly knocked me over many times during the first three miles and the rain seemed to be driving in horizontally at times, I made it to the first shelter. 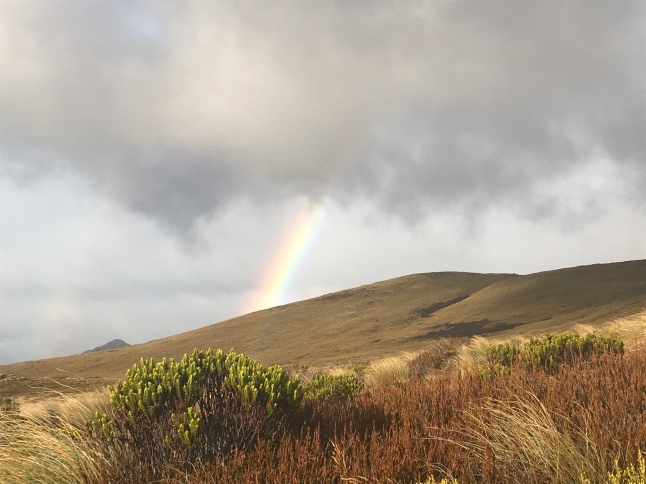 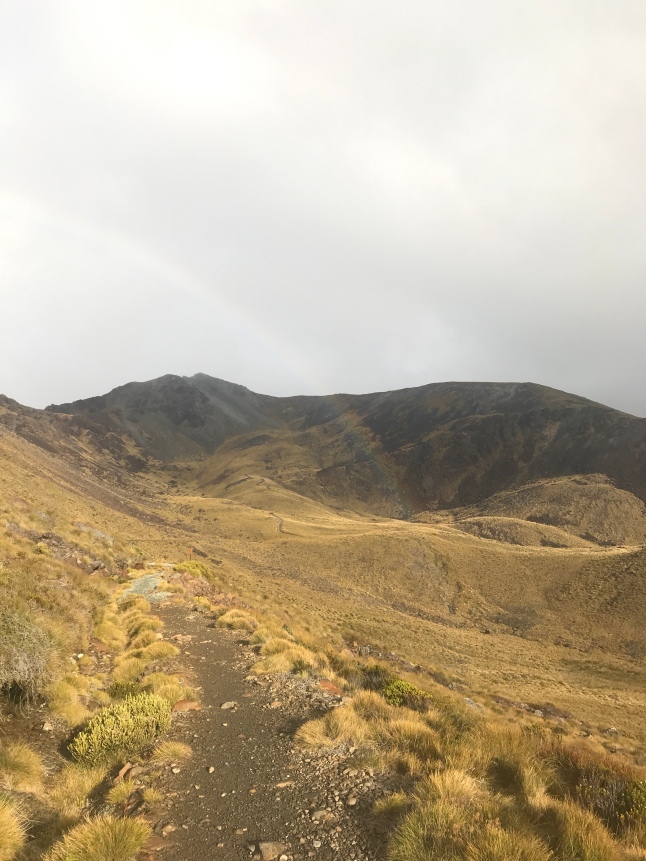 Although the Forest Burn Shelter was a welcomed stop, I quickly moved on as I knew I would keep warm the more I kept moving.

I skipped the trip to Mount Luxmore (nothing to see anyway due to cloud cover) and headed to the second shelter. Even more high wind gusts greeted the hikers on the ridges between Mount Luxmore and Hanging Valley. These shelters have no amenities minus four walls and a place to get out of the wind and rain–very welcome in the weather the hikers between Luxmore and Iris Burn Huts were facing today.

After the second shelter, I faced the steep stairs on the ridges as we descended to tree line where I found relief from the winds, if not the rains. 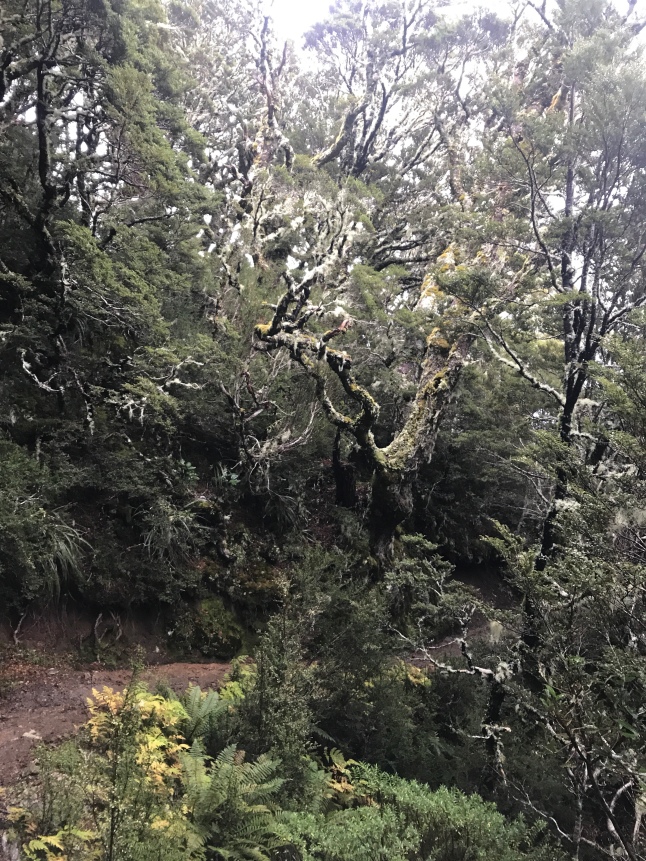 It was now another four miles down to Iris Burn Hut along another switchbacked, well-graded trail in beech forest. Iris Burn Hut was a welcomed site at mile 16.8 and I looked forward to getting out of my wet clothes and warming up around the wood stove in the great room. 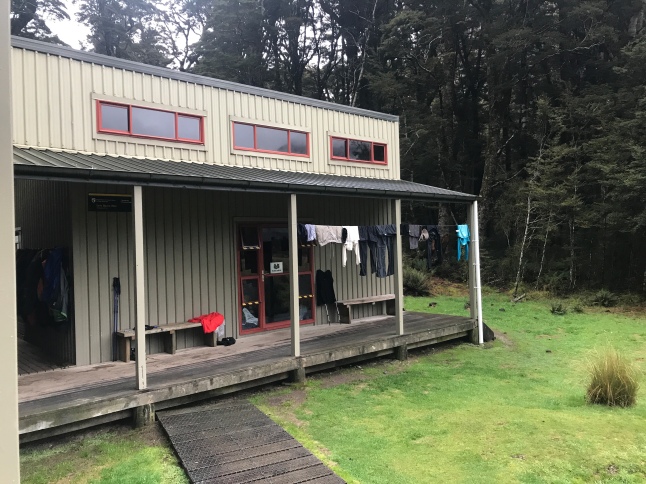 When I got into Iris Burn Hut around 12:45, there were four people there already: an Aussie couple, a young Swiss girl who was traveling New Zealand for four months between university and starting medical school, and an American guy from Cupertino, California. I knew that everyone would want to try to dry their clothing and warm up (as I did), so I got the wood stove going and then changed into my dry wool socks, and puffy jacket which both had thankfully kept dry in my makeshift dry sacks (kitchen bin bags) in my backpack. I got some water boiling in my trusty Snow Peak 700 for tea, snacked, and settled in for several hours of reading Ta-Nehisi Coates’ Between the World and Me.

The great room continued to fill with people as the afternoon went on–everyone chilled to the bone, clothing soaked, and exhausted from the effort to move against the high winds on the ridges. Despite the exhaustion, spirits were high in the room and conversation was livelier than the previous night.

Despite the good conversation, I longed to find the warmth of my sleeping bag and dedicate my last hour before bed finishing Coates’ essays. I retired to the upstairs bunk room, and finished Between the World and Me just before sleep overtook me.

Tomorrow is my final day on the Kepler. The rains were to abate and the sun was to return.

One thought on “Day 2 of Kepler Track: Luxmore Hut to Iris Burn Hut”